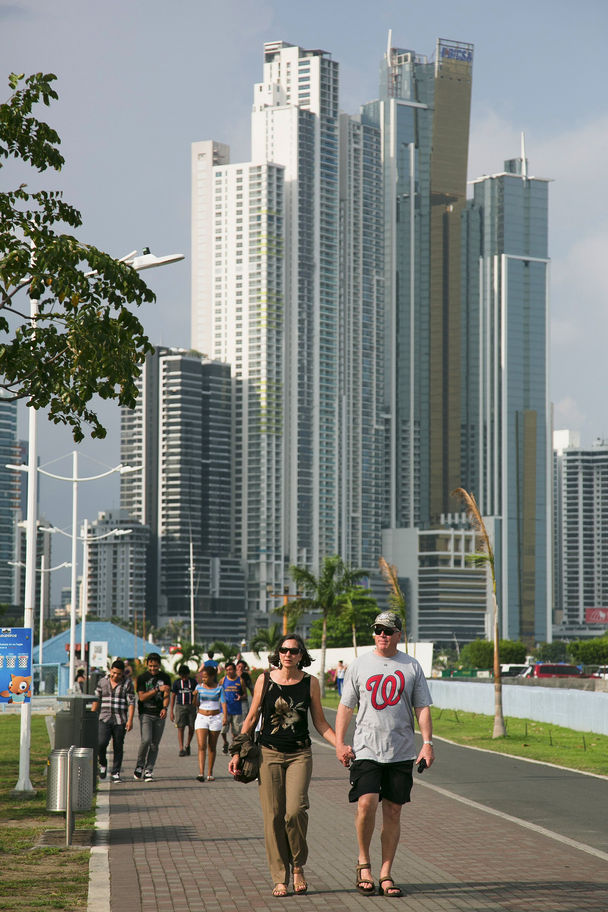 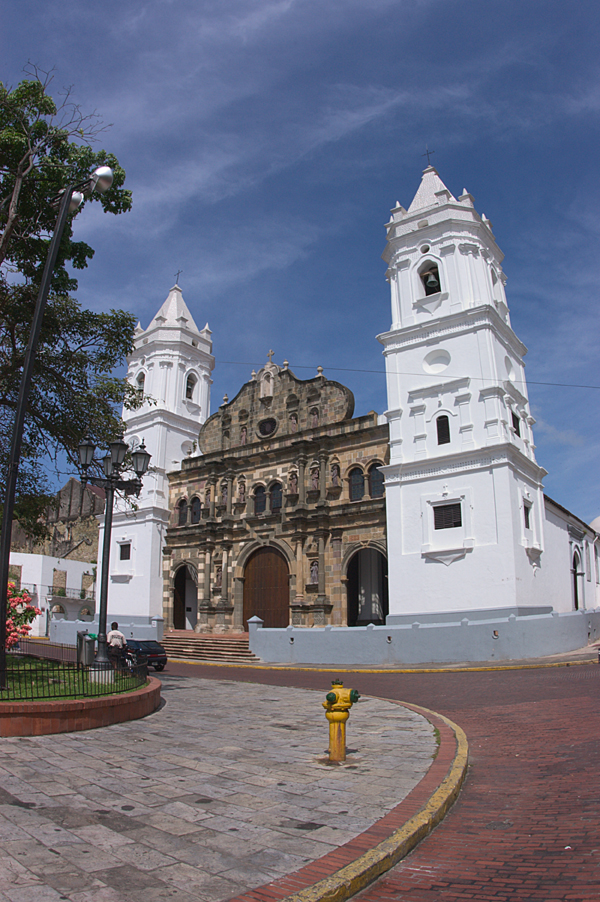 Photos by TITO HERRERA / The New York Times
People walk along the bay in Panama City.  Over the past 13 years, the Panama capital has been racing to become a  world-class metropolis.

In a great article by  Tim Neville of the NY Times, he explores the main streets of Panama City to the back alleys of the old city.

Traffic into Panama City was flowing for once, so Miguel  Fabrega had only a moment to point out the crumbling ruins in the  distance. They were the remains of a 16th-century New Spanish settlement  that the British privateer Sir Henry Morgan eventually sacked in 1671.  Ahead of us rose Old Panama’s modern replacement: a forest of green,  blue and yellow glass skyscrapers that sifted the metallic Central  American sky into great vertical columns.

“You’re going to hear a lot about identity, who we are and where we  are going,” said Fabrega, a 37-year-old artist, writer and partner in a  creative think tank called DiabloRosso, which promotes emerging artists  in Panama.

Despite being founded in 1519, Panama is really only 13 years old,  Fabrega argued, its birthday being Dec. 31, 1999, the day the United  States gave the Panama Canal and its surrounding land back to the  Panamanians. For the first time in a century the country was whole and  independent.

“My generation inherited this blank canvas,” said Fabrega. “Now we have the chance to make it our own.”

Today, that canvas is far from blank, however. Over the past 13  years, Panama City has been racing to become a world-class metropolis,  and for travelers, the changes have been enormous. In 1997 there were  perhaps 1,400 hotel rooms in Panama City. Now there are more than 15,000  rooms with 4,582 more in the pipeline, according to STR Global, a  London-based agency that tracks hotel markets. In the last two years  alone, Trump, Starwood, Waldorf-Astoria, Westin and Hard Rock have  opened hotels here. A new biodiversity museum designed by Frank Gehry is  nearly complete. The country’s first modern dance festival unfolded  last year, the same year Panama held its first international film  festival. The Panama Jazz Festival is going strong after 10 years. The  country even has its own year-old microbrewery.

“Panama was this compressed spring just ready to go,” said Keyes  Christopher Hardin, a New York lawyer-turned-developer working to  restore the city’s old colonial area. “When the Noriega dictator years  ended and the U.S. returned all that canal land, things just took off.  Everything that could go right did go right.”

Indeed, since 2008, when much of the world was in a recession, the  Panamanian economy has expanded by nearly 50 percent. The canal itself,  which frames the western edge of Panama City, is undergoing a $5.25  billion expansion that is expected to double its capacity and fuel even  more economic growth.

Yes, Panama still struggles with crime and poverty, but foreigners  are clearly intrigued with the way things are unfolding. In 1999 just  457,000 international tourists visited Panama, World Bank figures show.  In 2011, more than 1.4 million came. Plenty are staying, too:  sun-seeking Americans, Venezuelans and wealthy Colombian expatriates who  are buying second homes and retirement properties all over Panama.

From slums to cocktail bars

In short, this city of about 880,000 people has gone from a ho-hum  business center on the navy blue Pacific to a major leisure destination  in record time. In doing so it has become a place full of the kind of  paradoxes that occur whenever a very old place grinds against the very  new. While the capital now has luxury apartments and five-star cuisine,  the thing it needs most is a solid sense of identity.

In my spring visit, I hoped to get a sense of a city as it enters its  teenage years. I would hike through slums where street merchants sold  black magic spices, then change my shirt to sip $15 cocktails in the  neon glamour of a Hard Rock bar. I would eat terrible chicken and  wonderful octopus. I’d spend time with locals, expats, artists,  entrepreneurs and a former gangster.

For now, Fabrega wanted to show me his interpretation of some of the  changes afoot. We drove to Costa del Este, a section of the city with a  skyline that looked like a concrete comb. Our destination was a pop-up  gallery that had opened the night before inside an unfinished retail  space at the bottom of a new white skyscraper. Sixteen of Fabrega’s  abstract paintings with bright yellows, blues and reds hung on the  concrete walls in an exhibition he called “Banana Republic.” It didn’t  take long to spot some common motifs: finger-shapes that formed no  hands, faucets that had no pipes and machines that could do no work.

“This is Panama,” Fabrega said with a shrug. “It’s beautiful, but it makes no sense.”

Panama has pretty much always been a bridge for cultures, conquerors  and, well, birds, but once that mishmash gets distilled into the 50-some  blocks of the colonial neighborhood of Casco Viejo, an eclectic, almost  Noah’s Ark-like vibrancy prevails. The Chinese run so many small  groceries here that Panamanians simply call the shops “Chinos.” The  French left their mark on the corner of Avenida A and Calle 4, where a  Parisian-style apartment building displays elegant rounded balconies.  You hear German, Portuguese and English on the streets.

Parts of the area are still pretty seedy, though, and an elite  division of stern-looking police officers patrol the area with machine  guns and motorcycles. “I was definitely nervous about coming here at  first, with the shootings and the gangs,” recalled Matt Landau, a New  Jerseyan who moved to Panama City in 2006 and now owns Los Cuatro  Tulipanes, a boutique hotel and apartment enterprise in Casco Viejo. A  stray bullet smashed into the Canal House, the hotel where I stayed, in  2009, and Landau still warns guests not to wander beyond certain blocks.  But Casco Viejo does feel quite safe, even at night, when the  neighborhood comes alive with busy restaurants and rooftop bars. “I  can’t begin to tell you how much it has all changed,” Landau said.

Eager to explore more of the city, I met up with Jessica Ramesch, the  Panama editor of International Living magazine. We piled into her  Hyundai and fought our way out to a former U.S. military base called  Clayton that sits along the canal in the northwest part of the city.

“All of this area was pretty much closed to Panamanians when the  Americans were here,” she said as we crept through the Canal Zone, a  Phoenix-size former U.S. territory where Americans working and defending  the canal lived a strange, cross-world existence. “Zonians,” as they  were called, could get Guess jeans and Jif peanut butter just as on most  military bases abroad, but then monkeys might walk with the children to  school. Huge ships moved through the Miraflores Locks just to the west  of the road.

“Many Zonians stayed and some of the bases have become these gorgeous neighborhoods,” Ramesch said.

Clayton is one of them. Though it was now getting dark, I could see  community centers and signs for the City of Knowledge, a compound for  research, tech companies and nongovernmental organizations. We parked  near a soccer field and wandered toward a massive corotu tree where a  crowd had spread out blankets and lawn chairs. A band was warming up  near the trunk.

While much of the city’s night life unfolds along Calle Uruguay,  every full moon during the dry months hundreds of people head out to  Clayton to bang on Tupperware containers, buckets and anything else that  might make a noise. They do their best to follow the band — just a  group of friends, really — which plays pop, reggae and whatever else it  feels like.

“Who here can drum?” an announcer shouted into a microphone, and the pounding became a roar.

Over the next several days, few things I saw or did in the city had  quite the same wow factor as this bucket band gathered under an old  tree. I sipped cocktails at Barlovento, a new rooftop bar where slinky  women and V-shaped men swirled around in a cyclone of perfume and  cigarettes, and I shopped for tapestries made by Kuna Indians along a  waterfront paseo. A hike on a steep, carless road up a jungly hill in  the middle of the city stood out, but that’s because an anteater crossed  my tracks, and I’d never seen one of those before.

But here on the ground with wine and cheese and a fat moon hanging in  the trees, I wondered if a city needs to add up to make sense. As  absurd as Panama City can feel at times, it is certainly a lot of fun,  too, and between the cracks of all the chaos, these mini-miracles are  burbling through.